At Kingswood, when you talk about the “camp magic,” it’s all about our staff.

At the heart of Camp Kingswood is our team of 150 passionate and dedicated staff, working tirelessly to create a vibrant and exciting community rooted in Jewish values. Our staff are hand-picked for their energy, their enthusiasm, their love of kids – and because we think they will be great role models and caregivers for our campers. Every day they model what it means to be confident, caring, and adventurous – and we have a lot of fun along the way!

Our hiring process is competitive, and no matter the position, all staff go through an extensive vetting process, including reference checks, a background check, and an interview with a director. Our staff come from all around the world, and many of them have either grown up at camp or have worked with us in a past summer. Our staff leading activities are all experts not only in doing their activity, but in teaching it, and we have coaches, teachers, and artists amongst our team of talented specialists.

Before campers arrive, our staff participate in at least a full week of on-site staff training, learning and practicing the skills needed to ensure success for each individual camper. We also devote plenty of time to building our team, because the close-knit community of our staff is the foundation of our incredible Kingswood culture each summer.

Our summer staff is supported by our professional team, who work all year-long to bring camp to life.

Jodi believes camp directing is the best job in the world, and she was excited to return to the role in 2020, particularly in partnership with Mitch. It seems fitting, given that when she was last a camp director, at Camp Wise in Ohio, it was with Mitch’s brother Sean by her side as the assistant director!

Jodi grew up at Camp Arowhon, in Algonquin Park, Canada where she spent 10 magical summers. While she lived for camp, she didn’t know it could be a career choice. While working on an article about the impact of overnight camp as a magazine editor in her 20s, Jodi realized she wanted to be “doing” camp rather than just writing about it, so she returned to camp professionally in 2001 as a director. In her 12 years as a camp director and then nine years as the head of overnight camping for JCC Association, Jodi came to see camp as the most critical growth experience a young person can have. Having worked on-site with over 100 camps over the last decade as a camp consultant (including lots of visits to Kingswood!), she’s excited to have brought that perspective and so much learning back to Kingswood as a camp owner and director!

Originally from Buffalo, NY, Jodi has her BA from the University of Wisconsin-Madison in Journalism and Jewish Studies, and her Masters in Social Work from the University of Michigan, where she also completed the Drachler Program in Jewish Communal Service and Judaic Studies. She has served on the faculty of various training programs for camps, and coaches and trains camp professionals. Jodi splits her time between Maine and Jerusalem, where she lives with her family during the school year.

Mitch’s dream job has always been to own a camp! He is excited to have joined forces with his longtime friend Jodi to make that dream a reality.

Mitch grew up at Camp Sabra, the overnight camp of the St. Louis JCC, where he spent 15 summers. After studying Communications and History at the University of Missouri, Columbia (MIZZOU), he joined the business world as a senior specialist of leadership, management, and sales strategy. After five years in the business world, his passion for camp consumed him, so he traded in his suit and tie for shorts and flip flops, returning as Camp Sabra’s assistant director.

In 2011 he joined Camp Kingswood as the camp director, where he fell in love with the camp and the community. After three wonderful summers, in 2013 Mitch was presented with an opportunity to become the executive director of Pinemere Camp, in the Poconos. Mitch, known for his entrepreneurial spirit, helped Pinemere reach new heights in both their programmatic and operational success.

Mitch was ecstatic to rejoin the Kingswood community in 2020. He is a community builder, program innovator, lover of music and the outdoors, and a sports enthusiast. He believes in the amazing power of overnight camp and its ability to foster Jewish identity and create the perfect setting for growth and development.

Jon has been living ‘ten-for-two’ since he was seven years old! Growing up in Maine, Jon spent his summers attending the Portland JCC’s Center Day Camp. After moving through the ranks from camper to supervisor, Jon made the move to overnight camp in 2016 and joined the Kingswood family.

Jon graduated with a degree in Psychology from Marist College after taking two gap years to be a full time AmeriCorps volunteer with City Year New Hampshire. After college he joined Ivy Street School in Brookline, MA where he was the Activities Director before joining Kingswood full-time.

Jon has held various leadership roles at Kingswood, serving as a unit head, area head, and even the virtual program director was in-person camp was cancelled in 2020. He has seen and lived the transformative power of a camp experience, and he’s committed to embodying the values of community and ruach as he leads by example at camp. Jon is passionate about the social, emotional, and spiritual growth that can only be found at overnight camp, and is excited to be a part of that for every camper and staffer that comes into our community! 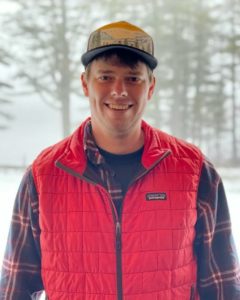 Ethan has been caring for Camp Kingswood as part of the Facility Crew for 13 years, taking over as the facilities manager in 2020. Originally from Cape Cod, Ethan grew up just a few miles from camp, and graduated from the University of Southern Maine with a degree in business management. Ethan loves that his job enables him to do work he loves in the great outdoors of Maine, and he’s just as happy building a new porch in July as he is shoveling snow off the roofs in January (and hopefully not May!). As he says “How can you not love camp life on Woods Pond?” We agree!

Camp food is in Mike’s blood, as a second generation camp food service director! Mike grew up in camp kitchens, and has been working with camps to serve delicious, healthy, Kosher food since he was a camper himself! Efrat grew up in Israel, and also is no stranger to working around food, growing up with a dad who’s a Rabbi and mashgiach (Kashrut supervisor). Efrat joined Mike in 2014, and they’ve been managing camp kitchens together ever since. They love to see campers enjoying their meals, which isn’t hard to do when they make most of the menu items at Kingswood from scratch! Love and care are the first two ingredients they put into every dish, and they take great pride in leading a summer kitchen team who love their work, being around kids, and camp!